Protecting What's Important to You Serious Legal Counsel
Contact Us Now For a Free Consultation
Please click Award & Selection Criteria & Methodology for information regarding the specific criteria used for selection of each of the above awards.
Home
Attorney Profiles
Christopher J. Vaccaro 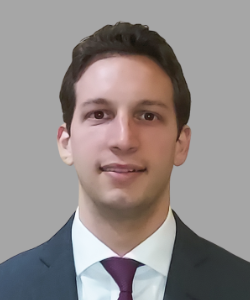 Christopher James Vaccaro, Esq., joined Kearns Rotolo Law in 2022.  Chris will focus his practice primarily on criminal defense at the Superior Court level, DUI/DWI cases, as well as domestic violence, juvenile matters, municipal court, and motor vehicle violations.
Immediately prior to joining Kearns Rotolo Law, Chris was an Assistant Prosecutor for the Hunterdon County Prosecutor’s Office, a position he had filled since August 2015. Chris began his prosecutorial career in the Narcotics Unit before being appointed to lead the Juvenile Unit. While at the Prosecutor’s Office, Chris served as the Bureau Chief of the Major Crimes Unit, Acting Bureau Chief of the Special Victims’ Unit, and Legal Advisor to the Professional Standards & Internal Affairs Bureau.
As an Assistant Prosecutor, Chris was responsible for prosecuting indictable offenses and handling all court appearances from initial charging through jury trial and sentencing. While managing a high-volume, victim-sensitive caseload, Chris also:
Also while an assistant prosecutor, he regularly performed community outreach services at educational institutions; served as law enforcement liaison to local elementary and high schools; presented on the topics of cybercrime/cyber safety, bias intimidation, narcotics, and criminal law; and participated in police ride-along programs and hands-on police training exercises.
In 2021, Chris was honored with the Hunterdon County Bar Association’s “Rising Star” Award. The award is presented to attorneys who have made significant contributions to the legal community, including volunteerism, and in recognition of their achievements as practitioners.
Before joining the Prosecutor’s Office, Chris served as Law Clerk to the Hon. Stephen B. Rubin, J.S.C., Criminal Division, and to the Hon. Bradford M. Bury, J.S.C., Family Division. While in law school, Chris served as a legal intern for the Hon. Joan B. Lobis, J.S.C., Medical Malpractice Docket, of the New York Supreme Court, Civil Branch.
In addition to his legal practice, Chris is an Adjunct Professor at Raritan Valley Community College where he teaches the course of Sports Law and Risk Management, a requirement for all Sports Management majors. He also serves as the Voorhees High School Mock Trial Attorney-Coach.
Prior to law school, Chris graduated from the University of Massachusetts-Amherst with a B.A. in History and earned a Teacher’s License in Secondary Education.  At UMass, Chris was a four-year NCAA Division 1 athlete on the men’s soccer team. In 2007, Chris was a member and game participant on the NCAA Tournament Final Four national semi-finalist team. Chris grew up in Hunterdon County and graduated from Hunterdon Central Regional High School.
Education