Please click Award & Selection Criteria & Methodology for information regarding the specific criteria used for selection of each of the above awards.
Home
Practice Areas
Personal Injury
Car Accidents 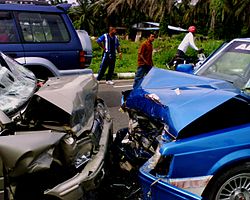 Accidents are defined as unplanned or unforeseen events that can result in injury or damage. Car accidents are often the result of driver behavior. In fact, the basis for most lawsuits to recover damages resulting from car accidents is the failure of a driver to use what courts refer to as “reasonable care.” If you are unfortunate enough to be involved in an accident in the Central New Jersey area, the car accident attorneys at Kearns Rotolo Law may be able to help.

Victor A. Rotolo is a lawyer who has spent his life protecting people, first as a police officer and now as an attorney.

Victor A. Rotolo is certified by the Supreme Court of New Jersey as a Civil Trial Attorney.

"A certified attorney is more than just an attorney who specializes in a particular area of law. A New Jersey attorney who is certified by the Supreme Court as a civil trial attorney must have:

There are a number of different types of car accidents, each of which are defined by the type of impact. Being able to identify the type of car accident you were involved in can help your lawyer prove your case or defend you against another driver’s claims.

The most common type of car accident is the rear-end collision, which occurs when one car strikes another from behind. These accidents can range from minor fender-benders to serious collisions. Usually the driver that rear-ends the other car is considered at fault; however, there can be mitigating factors involved, such as erratic or irresponsible driving by the car in front.

A side-impact crash is when the front of one vehicle runs into the side of another. Also known as T-bone or broadside accidents, these are among the most deadly, mainly because the sides of cars offer the least protection. While the advent of side airbags has helped to lessen the severity of these accidents, the increase in the number of larger cars on the road and higher speeds have led to an increase in the number of side-impact car accidents.

These accidents involve one car brushing along the side of another. The degree of impact is usually less than that in other types of car accidents. However, any impact can cause a driver to lose control, which can lead to another, more serious accident.

Head-on collisions occur when the front ends of two cars hit directly. This can happen when one driver tries to pass another or when a driver mistakenly enters a lane of traffic in the wrong direction. Major highways often have barriers separating traffic travelling in opposing directions; rural roadways do not, however, which results in more head-on collisions occurring on these roads.

Roll-overs occur when the impact of an accident causes one of the cars to flip onto its side or roof. These accidents occur when a driver loses control and the car trips over an object in the road, which can be a guardrail, curb, tree stump or even a soft-shoulder. Oftentimes passengers are fully or partially ejected from the vehicle in a roll-over, accounting for an increased risk of death or injury.

This type of car accident occurs when a driver is reversing into traffic, often from a parking spot or driveway, and hits another car or object. Since the driver backing-up is entering the flow of traffic, it is his or her responsibility to make sure the road is clear before proceeding.

The attorneys at Kearns Rotolo Law are experienced at handling all types of accident cases. They understand the physical and emotional pain as well as the financial worries experienced by car accident victims. Our attorneys give each case the care and attention it deserves, listening attentively to the questions and concerns of clients to assure each one receives the representation they deserve.

If you are the victim of a car accident, our attorneys will investigate the circumstances of your accident in preparation for trial while you concentrate your efforts on recovery. The law provides accident victims limited amount of time in which to file a claim for compensation. To avoid missing your deadline, contact Kearns Rotolo Law today for a consultation.