Protecting What's Important to You Serious Legal Counsel
Contact Us Now For a Free Consultation
Please click Award & Selection Criteria & Methodology for information regarding the specific criteria used for selection of each of the above awards.
Home
Community News
July 2015 - Leave the Fireworks to the Professionals

July 2015 - Leave the Fireworks to the Professionals 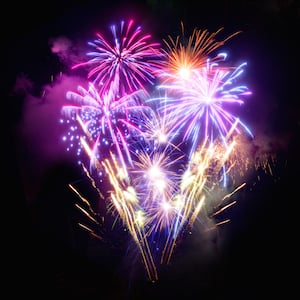 For many, fireworks are synonymous with summertime. The Fourth of July, county fairs, outdoor concerts, baseball games – there always seems to be an occasion for these displays. As tempting as they are, however, fireworks are best left up to professionals.

Don’t be taken in by flyers that come to your home, newspaper advertisements, or even the store displays that greet you as you cross the border into neighboring states. Possession of fireworks without a valid permit is illegal in New Jersey, plain and simple. That includes everything from sky rockets to small firecrackers; even sparklers are outlawed. The fact is fireworks, when handled improperly, pose serious risk.

The Consumer Products Safety Commission (CPCS) revealed that, within a month of the July 4 holiday, emergency rooms treat an average of 240 people a day for fireworks-related injuries. Hands and fingers are most affected, accounting for 36% of the injuries; head, face and ear injuries rank second at 22%; then eyes (16%); trunks and other body parts (7%); and arms (5%).

Children are most vulnerable. The American Academy of Pediatrics (AAP) stated 45% of all fireworks injuries are suffered by children younger than 15; of those, 16% occur from sparklers. Many people don’t realize sparklers burn at nearly 2,000 degrees, and they put them into the hands of children too young to understand the dangers. The AAP reports 57% of all sparkler-related injuries occur to children under five.

Fire is another risk. The National Fire Protection Association stated in any typical year, more fires are reported in the U.S. on July 4 than any other day, and two out of every five of those fires are attributed to fireworks.

In New Jersey, possession of fireworks with intent to sell carries fines of up to $7,500 and/or up to 18 months in jail. Anyone caught using fireworks without a permit could be fined up to $500 and/or jailed for up to 30 days.

It isn’t worth the injury or the punishment, so leave the fireworks to the professionals and just sit back and enjoy the show!

As published in the July 2015 issue of the "Clinton Township Newsletter."