Protecting What's Important to You Serious Legal Counsel
Contact Us Now For a Free Consultation
Please click Award & Selection Criteria & Methodology for information regarding the specific criteria used for selection of each of the above awards.
Home
Community News
February 2021 - Stuck in Traffic? Don't Reach for That Phone

February 2021 - Stuck in Traffic? Don't Reach for That Phone 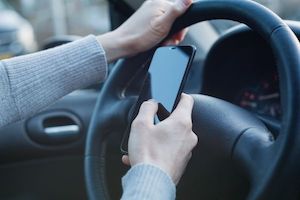 An advantage of cell phone technology is its ability to keep you always connected. That's also a drawback, not to mention a serious safety hazard, especially when it comes to handheld phones and traveling.

According to the latest statistics available from the NJ Department of Transportation, more than 1,370 accidents in 2018 were attributed to cell phone use. Distracted driving has been cited as the number one cause of New Jersey's fatal accidents since 2011.

New Jersey allows the use of hands-free or Bluetooth devices but banned the use of handheld cell phones while driving in 2008. Since then, efforts to curb this distracting behavior have continued with the latest being a proposed bill that would ban talking and texting on a handheld cell phone even while stuck in traffic or at a red light. Introduced to the state legislature last February, this bill received unanimous approval of the NJ Transportation Committee in early December.

The tasks involved with answering a call or text are said to increase a driver's risk of getting into an accident threefold. Texting takes a driver's eyes off the road for about 4.6 seconds on average. When moving at 55 mph, a car can travel the length of a football field in that time - a significant distance when doing it blindly.

Before you pick up your cellphone to answer a call or send that text while driving, pull safely off the road. It will increase the chances you'll be around to receive many more messages in the future.